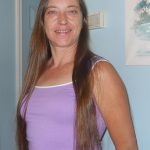 Yesterday I went to a client’s home to give her a massage. She’s been a regular semi-weekly patient of mine since approximately 2004 and has become active in trying many new health modalities including yoga. She has been doing stretches for the past several years because she has had a restriction in her right thigh which would not allow her to get into a full Lotus position ever. I’ve tried massaging it free many times without success in the past.

This was her desire as far as what she hoped THOR could finally do for her. Since there is no such protocol for this issue, I was in a position to experiment a bit. With her in the stretch position (pulling bent knee to chest with foot crossed over to other knee) where she encountered the restriction, I had her point at the spot where it felt tight. I placed the 1 Watt laser on 2.5 on the spot and within 30 seconds she smiled and said “It’s weird, but the restriction just moved to another spot.” I placed the 1 W on the spot she indicated and again within 30 seconds she said it moved again. I moved to that spot and as it melted away her knee was now flat against her chest and she had FULL range in her right hip.

It was a total WOW moment and she said “It’s amazing how much you can feel it helping when you really have an issue!” Brad was so excited to hear this when I got home last night that he asked me to write a testimony of the experience to you. I love our THOR.