There have been numerous reports describing the phenomena of biostimulation and bioinhibition using low-level laser therapy (LLLT) and other light and IR sources within the laboratory and in clinical trials. Stimulation or inhibition employed correctly has been shown clinically to reduce pain, improve tissue repair, resolve inflammation and stimulate the immune system. All these effects are sensitive to different irradiance and / or different energy (sometimes described as dose rate or fluence rate effects). The typical ranges for biostimulation and bioinhibition will be examined and a 3D Arndt Schulz style model proposed to illustrate possible ‘dose sweet spots’ for the intended clinical effects.

The Arndt-Schultz Law is frequently quoted as a suitable model to describe dose dependant effects of LLLT 1, 2, 3, 4. The Arndt-Schultz Law states that “weak stimuli increases physiologic activity, moderate stimuli inhibit activity, and very strong stimuli abolish activity”5, 6, 7. Simply put; a small stimulus may have no biological effect, a moderate stimulus may have a biostimulatory effect, a large stimulus may have an bioinhibitory or even cytotoxic effect. In the context of LLLT the increasing “stimulus” may be irradiation time or it may be increased beam intensity (irradiance). A biphasic response has been demonstrated many times in LLLT research 8,9,10 This non-linear effect contradicts the Bunsen-Roscoe rule of reciprocity which predicts that if the products of time of exposure time and irradiance are equal, then the quantities of material undergoing change will be equal. This inverse linear relationship between intensity and time has frequently failed in LLLT research.4,11. 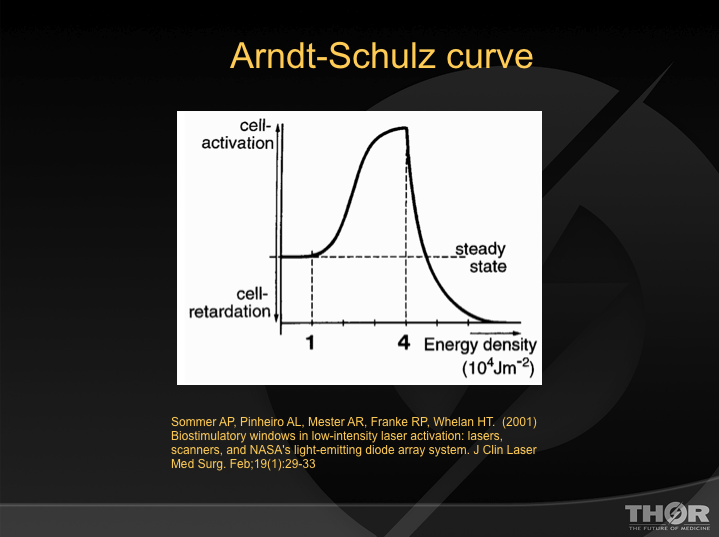 At the NAALT 2007 conference, Anders12 hypothesised; “If we had extended the time and irradiance ranges I believe we would have found an island in the middle of the data table indicating the effective combinations”. Karu11 plotted the rate of DNA synthesis dependence on light intensity and time. Taking this template for both increases in time and intensity it has been possible to speculate and redraw this in a 3 dimensional graph to illustrate how a dose “sweet spot” for biostimulation may appear when the appropriate combinations of time and irradiance are achieved at the target tissue.

Whilst this model could help explain and explore dose rate effects it must be remembered that there are many other factors affecting LLLT dosimetry including wavelength, depth of target tissue, attenuation, target cell type, state of target cells, pulse regimes and treatment intervals. Other confounding factors include a lack of beam measurement standardisation in this field of study and some unstable laser and LED product performance. These factors mean that much published data is not robust and should be referred to cautiously. When conducting LLLT research all parameters should be recorded and published including wavelength, average power, (pulse width, pulse and peak power if any) and beam area (including the beam measurement method). The recommended method for expressing beam area is the 1/e2 point.13 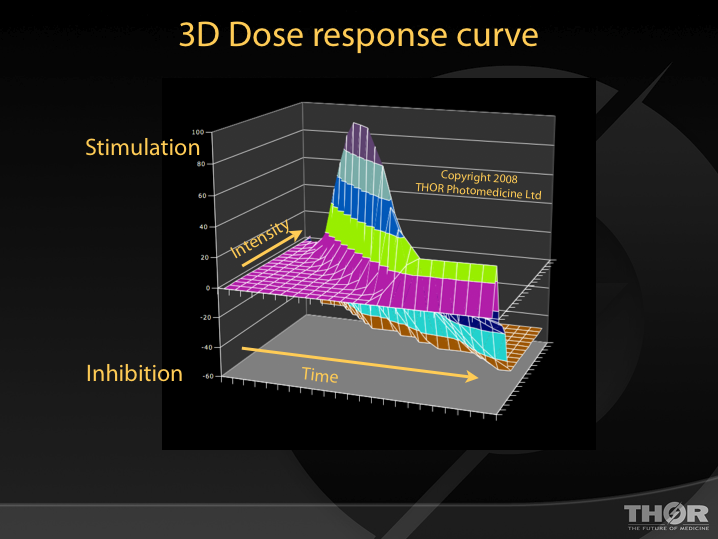