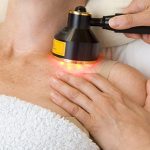 “I came with a completely open mind because I have been living with a lot of pain since I was 16. I am now 85 years old. I was in an accident which resulted in undiagnosed spinal issues which resulted in living with many discs out of alignment, deterioration, and constant pain. The most recent pain has been in my left shoulder; the muscles were trying to do something they were ill-equipped to do. The pain there has been constant and acute for more than 2 years.

So, when my brother suggested I try Josh’s Thor Laser therapy, I thought, ‘I have nothing to lose’. By the end of the session, I was out of pain, and even the next day, and even coming back to England and moving things and doing things I shouldn’t do. Still no pain 10 days later! I can feel it just starting to niggle back, so I am searching for someone to be able to give me the same treatment here. Then there was the shooting pain across my lower abdomen that I’d been dealing with as a consequence of an infection that I am fighting with antibiotics. By the end of the treatment, that pain had also disappeared and has not returned. Then there were my swollen legs and ankles, something that had never happened to me before, that happened as a result of my trans-Atlantic flight. I was so concerned about it. Again, the swelling went down the next day. I did a 10-hour trip the next day coming home and the swelling has not returned. That was the most amazing thing! All that in only one treatment!

I’ve been there, tried so many things over the years to get out of pain, and this is the most successful thing I’ve ever tried!”
Mrs. Clare Coxall
Somerset, UK