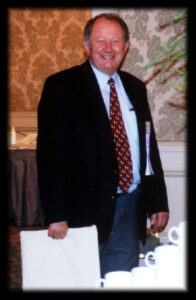 He was a vital founding member of the World Association for Laser Therapy (WALT) and a long-standing cheerleader for Photobiomodulation (PBM) as it is now known.

As well as being Consultant Anaesthetist at The Royal Oldham Hospital UK, Kevin was medical director at Dr Kershaw’s Hospice.

Kevin also had the thankless task of being the WALT treasurer for many years. His leadership and steady hand ensured the organisation survived several problematic periods.

All who met him will remember his warmth, humour and generosity of spirit.

He will be forever memorialised in my LLLT/PBM presentations as he researched and published two of my favourite PBM papers of all time (abstracts below and links to some PDFs).

I have converted some of his slides into this 4 minute movie and managed to lay some audio over it which was recorded about 20 years ago. Given this is one of the worst kinds of pain any one can suffer it is remarkable that such a simple tool can achieve such good results.

So thank you to Kevin for your contribution to the world, and our condolences to Jill, his wife and his children. Kevin was a special man, I know he will be missed.

Other newspaper reports about Kevin https://www.manchestereveningnews.co.uk/news/local-news/easing-the-burden-for-patients-in-pain-1134114

ABSTRACTS WITH PDF LINKS BELOW

THE EFFECT OF INFRARED LASER IRRADIATION (LLLI) ON THE DURATION AND SEVERITY OF POSTOPERATIVE PAIN: A DOUBLE BLIND TRIAL

This trial was designed to test the hypothesis that LLLT reduces the extent and duration of postoperative pain. Twenty consecutive patients for elective cholecystectomy were randomly allocated for either LLLT or as controls. The trial was double blind. Patients for LLLT received 6- 8-min treatment (GaAlAs: 830 nm: 60 mW CW: CM) to the wound area immediately following skin closure prior to emergence from GA. All patients were prescribed on demand postoperative analgesia (IM or oral according to pain severity). Recordings of pain scores (0-10) and analgesic requirements were noted by an independent assessor. There was a significant difference in the number of doses of narcotic analgesic (IM) required between the two groups. Controls n = 5.5: LLLT n = 2.5. No patient in the LLLT group required IM analgesia after 24 h. Similarly the requirement for oral analgesia was reduced in the LLLT group. Controls n = 9: LLLT n = 4. Control patients assessed their overall pain as moderate to severe compared with mild to moderate in the LLLT group. The results justify further evaluation on a larger trial population

Postherpetic. neuralgia can be an extremely painful condition which in many cases proves resistant lo all the accepted forms of treatment. It is frequently most severe in the elderly and may persist for years with no predictable course.
This trial was designed as a double blind assessment of the efficacy of low level laser therapy in the relief of the pain of post herpetic neuralgia with patients acting as their own controls. Admission to the trial was limited to patients with established post herpetic neuralgia of at least six months duration and who had shown little or no response to conventional methods of treatment. Measurements of pain intensity and distribution were noted over a period of eight treatments in two groups of patients each of which received four consecutive laser treatments. The results demonstrate a significant reduction in the pain intensity and distribution following a course of low level laser therapy.

Founder and CEO at THOR Photomedicine Ltd. About THOR
This entry was posted in Research. Bookmark the permalink.